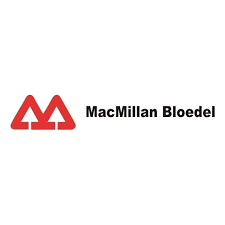 MacMillan Bloedel Limited, sometimes referred to as "MacBlo", was a Canadian forestry company headquartered in Vancouver, British Columbia. It was formed through the merger of three smaller forestry companies in 1951 and 1959. Those were the Powell River Company, the Bloedel Stewart Welch Company, and the H.R. MacMillan Company. It was bought by Weyerhaeuser of Federal Way, Washington in 1999.

The last of the three pre-merger companies was the H.R. MacMillan Export Company, which was created in 1919 by Harvey, or H.R. MacMillan, British Columbia's first Chief Forester. MacMillan reportedly gained considerable experience in world lumbering during World War I. With his colleague Whitford Julian VanDusen, another forester, MacMillan incorporated a company in 1919 to sell British Columbia lumber products to foreign markets. In 1924, they established a shipping company that would become one of the world's biggest charter companies. With the creation of Seaboard Lumber by the other mill owners in British Columbia, there was a major threat to MacMillan, as Seaboard was to export all the lumber from the companies that founded it leaving MacMillan without the lumber needed to fulfill their orders. MacMillan responded by beginning to purchase mills and creating the first truly integrated forestry company in British Columbia.

In 1951 Bloedel, Stewart and Welch merged with H.R. MacMillan to form MacMillan Bloedel Limited. The two companies had timber holdings side-by-side and there was a natural synergy from this merger. Bloedel, Stewart and Welch held many timber resources and MacMillan was the first truly integrated forestry company in British Columbia. The merger in 1951 created a company that would be able to compete on the global scene.

Beginning in the 1960s, MacMillan Bloedel expanded across North America as well as to Europe and the United Kingdom. At its peak, acquisitions and construction activities gave MacMillan Bloedel worldwide assets of more than C$4 billion.